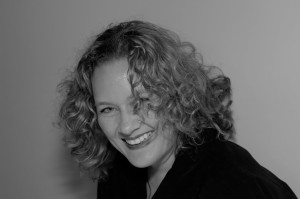 I had the pleasure of interviewing up and coming horror author Tracie McBride who recently premiered a special edition release of “Ghosts Can Bleed,” an anthology published by Dark Continents Publishing. Dark Continents Publishing is an exciting venture. It is a co-operative publishing company and I will have to see about interviewing Tracie again at a later date in regards to this bold enterprise. For now, I was curious about her chilling fiction.

1. Have you always wanted to be a writer? Why? Or when did you first decide and why?

When I was about four years old, I wanted to be an actress or a model, in the same way that my daughter at the same age wanted to be a mermaid. I think it was shortly after starting school, when I discovered that I could learn to string written words together in ways that made sense, that I decided I wanted to be a writer. From that moment on, I thought of myself as a writer, even although I didn’t make any serious moves towards realizing that ambition until I was in my mid-thirties.
Why? Probably for the same reason that many other writers took to the keyboard. I love books. And I wanted to create the things I loved.

I have to confess to being quite fickle and promiscuous in my reading tastes. I was passionate about Robert Heinlein’s work when I was fifteen. In rough chronological order, my literary crushes moved on to Kurt Vonnegut Jr, Stephen King, Anne Rice, Julian May, Clive Barker and Margaret Atwood.
Audrey Niffenegger’s “The Time Traveler’s Wife” is one of my all-time favourite novels, although judging by the literary forums, it’s a polarising work. I think it suffered from being described as a literary novel, when really it’s a science fiction novel, exquisitely plotted and startling in its complex depiction of time travel. Oh, and it’s also a genuinely moving tragic story, AND it’s a literary novel.
My current favourite is China Miéville. The scope of his imagination is jaw-dropping. I’m reading “Kraken” right now. I’m a little jealous of his talent. OK, a lot jealous.

3. You write dark fantasy and horror short stories. Where do you find your inspiration?

Dreams and nightmares. Odd little thoughts, random images or sentences that come into my head and won’t go away. Real life experiences and observations that I smoosh together with speculative fiction tropes to see what results.

4. Which of your stories bothered you the most and you found yourself thinking about it after writing it?

“Lest We Forget”, published in the Spectrum Collection in 2010. My husband, a former armed forces serviceman, had just taken our young son to his first Anzac Day Dawn Service. He commented that he had been to many Dawn Parades over the years, but he had found this one the most moving. I got to thinking about the nature of war, of sacrifice, of all those parents over the years who sent their children off to fight for the greater good and never welcomed them home again. It was an intensely emotional, personal and difficult piece to write.

5. What do you think is the essence of horror?

Oh boy. Talk about a hard question… Horror is visceral. It’s physical. It’s that feeling of having your intestines squeezed in your fist. It’s that creeping sensation on the back of your neck. It’s that surge of adrenaline, that racing of your pulse, that overwhelming desire to run far, far away, only there’s nowhere to run to and no way out. Unless you close the book, but if it’s really good horror, it will creep after you off the pages and lodge in your subconscious. What sends you into that state will vary from person to person, but some fears seem almost universal. The fear of the unseen, the unknown, or the unfamiliar. The fear of having control over your life forcibly wrested from you. The fear of being powerless in the face of an unstoppable amoral force.

6. Which of your characters do you like or admire? Why?

Now, that’s a funny thing – I will often find myself halfway through a story and I’ll think, “You know what? I don’t like this character very much.” It makes it easier for me to do horrible things to them, I suppose. I do sympathise with many of my characters, though, especially the ones who are loosely based on me, like poor dead Sharon in “Last Chance to See”. And I am rather fond of Nim of the Kamankay. Who wouldn’t love a big, strong warrior woman with a leather skirt and facial tattoos?

7. Which of your characters do you think you would not like to meet in real life? Why? Where did you get the idea for them?

You want me to pick just one? Most of my stories feature unsavoury types, be they supernatural or mundane. They all have two things in common; they have unnatural abilities or an excess of power, and they lack a moral compass. That is genuinely scary to me – someone or something that possesses both the ability to seriously mess you up, and the lack of restraint not to do it. Here’s a random selection:
Zero in “Whipping Boy”. He came to me in a dream. He is both victim and villain, and all the more dangerous for it.
Creepy Doll House lady Susan in “Life in Miniature”. I got the idea for this story from a piece of flash fiction I read years ago about a peculiar form of bonsai.
Sh’teth in “Baptism”. She was inspired by the malevolent mermaids in the 2003 movie version of “Peter Pan”.

8. Do you think that ghosts and other paranormal creatures might be real? Have you ever had something happen that you could not explain?

Vampires, werewolves and zombies? No. Ghosts… maybe. I haven’t experienced any supernatural visitations, but several members of my immediate family have. So I maintain an open mind.

9. When you write, do you have a particular creative process that works for you? Or a particular set of steps that you go through to write a short story?

My process is very simple. I seldom do plot or character outlines. I just start at the beginning and write until I can’t write any more. Either the story has enough legs to carry it through to the end, or it hasn’t. Sometimes I’ll take on an unsatisfactory ending and give it to one of my critiquing groups to read in the hope that they can help me tease some meaning from the narrative.

10. How many short stories have you published? What anthologies can they be found in?

Numbers. I like numbers. They’re my second favourite thing after words. As I write, I have 38 stories and 20 poems published or forthcoming. 22 of those pieces have been reprinted. You’ll find my work in print and online magazines, anthologies, and the occasional audio publication. Recent anthologies include Dead Red Heart, Roll the Bones, Devil Dolls and Duplicates, Big Pulp (Winter 2010) and Horror Library Vol. 4. And of course there is The Spectrum Collection, a sampler of short fiction and poetry by the members of the writers’ co-operative Dark Continents Publishing, of which I am vice-president. Dark Continents has just released a collection of my previously published speculative short stories and poems, entitled “Ghosts Can Bleed”.

Tracie McBride is a New Zealander who lives in Melbourne, Australia with her husband and three children. Her work has appeared or is forthcoming in over 50 print and electronic publications, including Horror Library Vol 4, Coyote Wild, Abyss and Apex, Space & Time, Sniplits and Electric Velocipede. She won the Sir Julius Vogel Award for Best New Talent for 2007. She is active member of the HWA, an associate editor for horror magazine Dark Moon Digest and vice president of the writer’s co-operative Dark Continents Publishing. Her blog can be found at http://traciemcbridewriter.wordpress.com/

Please look for “Ghost Can Bleed.” 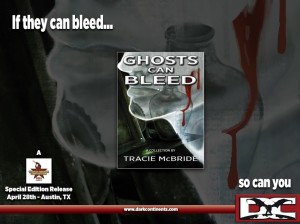