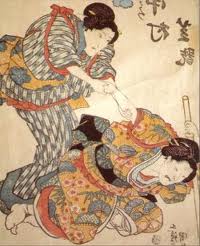 Chiyome was the wife of the warlord Mochizuchi Nobumasa who was from Shinano and the head of Mochizuki Castle. Whenever he was off making war, she was in charge of the castle. After his death in 1575, it is rumored that her husband’s uncle approached her and offered her the chance to be in charge of an underground network of kunoichi agents. Kunoichi means “deadly flowers” and he was offering her the chance to be at the head of a group of female warriors.

Medieval Japanese aristocratic politics were corrupt and ever changing. Samurai were more than warriors, they were spies, disseminators of subversion, and assassins. Despite that they did the noble class’ dirty work they weren’t paid very well. As popular as they are now in modern culture, during their time they were paid a wage akin to that of someone who works in a fast food chain. Chiyome who was recently widowed had the skills of a ninja, but to become a ninja was unacceptable. She decided to become the sensei to the kunoichi.

Locked away in her compound, Chiyome began to recruit. Those taking note thought that she was simply taking in unfortunate girls and women. Her recruits were orphaned and abandoned girls, runaways, and downtrodden women. Nobody on the outside seemed to hear the whistle of sword blades cutting the air or the zing of throwing stars hitting targets.

In Chiyome’s Kunoichi School for Wayward Girls, the girls were trained in the martial arts. They learned to use knives, swords, spears, and halberds. They also learned the art of disguise, how to use their feminine wiles, how to escape, and to improvise. Sometimes a fan would be sharpened to have a razor sharp edge or a hairpin would be dipped in poison in order to bring death to a target. It is rumored that at the height of Chiyome’s power she had 200-300 agents that were working for the Takeda clan and kept the daimyo Takeda Shingen informed of all happenings within the countryside. Her women could be anywhere. A washer-woman, actress, maid, market seller, or geisha might be one of her deadly flowers. Madame Chiyome was truly a dangerous woman. 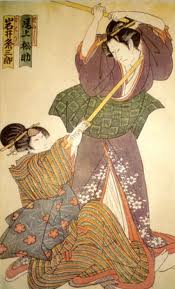