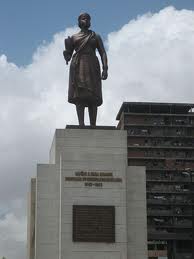 Queen Nzinga Mbande was said to have been born with her umbilical cord wrapped around her neck. This was an omen that she would be a proud woman. It was prophesied that she would become a queen.

In 17th century south west Africa, the Portuguese sought to colonize the region in order to control the trade in African slaves. They attacked many of their trading partners including the African kingdom of Ndongo where Nzinga’s family ruled. At the time her brother King Ngola Mbandi was forced to flee his country when the governor of Luanda invaded the capital as part of an aggressive campaign to conquer and colonize the area. Thousands died. Thousands were taken captive.

The king sent Nzinga to negotiate a treaty with the Portuguese. When she met with the governor, Joao Correia de Sousa, he did not offer her a chair. Instead he asserted that she was a subordinate by placing a floor mat where she was to sit. Refusing to bow to the governor, Nzinga summoned one of her servants. She had him kneel on the floor and she sat upon his back placing herself at a similar stature to the governor. Rumor has it that at the end of the negotiations she had the servant beheaded in front of the Portuguese to show her fearlessness. The Ndongo people did not submit and assume vassalage under the Portuguese.

The treaty with the Portuguese was never honored despite in a show of good faith Nzinga Mbande had converted to Christianity. The Portuguese never withdrew and never returned their captives. Nzinga Mbande’s brother committed suicide and she became queen. Rumors abounded that she had poisoned him and the Portuguese used the rumors to not honor her right to succeed him.

Queen Nzinga Mbande refused to be subjugated under the Portuguese. She made an alliance with the Dutch and with Dutch reinforcements she routed a Portuguese army in 1647. She laid siege to the Portuguese capital of Masangano. When the Portuguese recaptured Luanda in 1648, she retreated to Matamba and continued to resist Portugal. She and her two sisters personally lead their troops into battle.

In 1657 after a decade of battle, she made peace with the Portuguese and included in the treaty that they would supply support to her family as allies to maintain them as the ruling family. She devoted her later years to resettling former slaves. Legends abound that she had a male harem that she required to dress as women, that men were beheaded after one night of pleasure with her, and that to show her ferocity she ate human flesh. Despite numerous attempts to dethrone her, Queen Nzinga Mbande remained in power until her death at the age of 80.