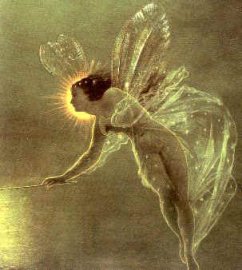 I have been reading some of the short stories of Angela Carter. She is best known for her collection of short stories which was titled “The Bloody Chamber.” I may feature this collection at later date in a book review, but each of the stories is a retelling of a fairy tale.

Fairy tales are potent with meaning. Today’s collection of writing prompts are all taken from fairy tales.

1. In the story of Beauty and the Beast the traditional theme is that by being debased the prince learns to be generous of spirit and Beauty recognizes this spirit beyond his ugly visage. But the story is also one of transformation. The prince loses everything to become the beast, is transformed, and finds happiness in the end. Beauty loses her family, makes the best of her situation, and is transformed in the end as well. How could you retell the story of Beauty and the Beast and put the emphasis more on ideas of death and rebirth?

2. Sleeping Beauty is a story about a young woman who is cursed to sleep until she is awakened by the man who will be her love. It is often interpreted as a story about sexual awakening. What if the story took a different turn entirely? What if Sleeping Beauty is an artist or a dreamer and her “awakening” is really pulling her away from her subconscious and her source of inspiration? What might the story look like then?

3. Puss-in-Boots is about a wily, talking cat whose fanciful tales cause his master to become very wealthy. What if Puss-in-Boots were real in the modern day? How could a talking, wily cat be a boon to a modern day young person?

4. In the Emperor’s New Clothes no one is willing to admit to the emperor that they cannot see the clothing. No one is willing to risk their reputation and speak with honesty. How could this idea be transported into a fairy tale telling of the presidential primaries?

These are just a few ways to reinvent fairy tales. A rereading of a collection of the tales could provide inspiration for many stories.