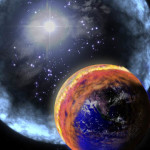 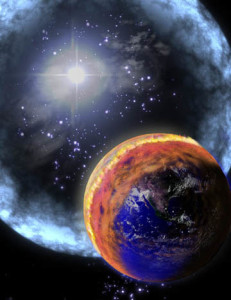 Interstellar Space Flight is not impossible. I was up thinking about it last night. Dreamt about it. The hindrances are: some engineering problems that are solvable, motivation, pulling national governments together for a cooperative effort, and resources.

We are an adaptable species that moves easily into a wide range of habitats and uses are abilities to problem solve to create situations and solutions that enable our expansion into new territories. We are more likely to move into space than we are to stop over-populating the earth. The issue becomes one of cost and benefit. What benefits are there to moving into space that make the cost one worth the risk?

Why set up a moon base? Orbital space cities? Communications that are more reliable, alterable, and repairable than satellites? Defense? Scientific or manufacturing reasons?

Anybody know of resources that I should look at for further development of thoughts on interstellar space flight?

A group of people aboard an interstellar ship would be like a band of nomads. A particular culture would evolve as the group traveled. Traditions, rituals, and holidays would be created, normalized, and made part of the calendar. Imagine what the significance of Earth Day would be upon an interstellar flight. Imagine how social norms might be re-configured depending on circumstance. How would day and night be re-conceived? Or would they? Basic conceptions of time would be altered and no longer anchored to the the spinning earth as it moves about the sun. It would be based on a reality created by the minds of humans designing their own reality.

What considerations would go into who might be selected for the voyage and to become one of the interstellar nomads?

What possible reasons would compel a group to finance a voyage to another star system?

What advance knowledge would make the risk worth taking of removing humans who have adapted specifically to the habitats of earth and sending them into the cold vastness of space?

How would you keep the descendants of the original chosen voyagers committed to the mission?

What skills would you cultivate on board ship?

How would you acclimate people to their eventual destination? Would you force a breeding program to develop adaptive traits? Use genetic modification? Use some advanced nanotechnology or cybernetic technology?

Much to think about. Tomorrow– the hope of interstellar flight.

This morning I began to think about different ideas. Ideas of a future that is not utopian or necessarily dystopian. A future world where ordinary people are carrying on the species as we have done for thousands of generations. I have occupied the afternoon while unpacking clothing just speculating and letting my thoughts and imagination meander.

I have barely scratched the surface of possibility.

For this post I am only going to isolate one idea and play with it. I am going to take the idea of medical technology making huge breakthroughs and for a price it is possible to alter one’s appearance and shape to anything desirable.

Take this idea and let it sink into your brain. Imagine if you could look like anyone or anything you wanted to and the gene therapy was available to re-sequence your DNA to achieve this.

What if you could excel in any sport by simply altering your physical self through genetic manipulation?

What if you could be as strong as you wanted? Swim underwater with gills? Withstand immense gravity?

What if your employer could require adaptations to make you more suitable for a job? Greater synaptic responses with accompanying neurological damage? The ability to go without sleep and be more aware so you could work longer hours? A slower metabolism to conserve nutritional resources? The ability to interface telepathically with a bio-engineered computing system organized on the same model as the brain but with an accompanying loss of privacy? What would you be willing to alter about yourself to be employed? What salary would make it worthwhile?

What if you could choose your physical appearance and appearance became just another form of fashion statement? What would this do to notions of race? Notions of discrimination? On what basis would a hierarchy of social power and distribution of resources fall upon?

What if with an alterations of genetic material new limbs could be regrown? What if all disabilities could be done away with? What if diversity was solely by choice? Provided you could afford it.

What if aging was stopped and reversed? What if humans could choose to die?

Think about all of these and what they would do to society. How would society change? Would it change? Could we still maintain ourselves in some form of post-industrial revolution/semi-democratic/free trade economy when our sense of our physical selves could be so radically altered?

And what would this do to the individual psyche? What types of identity disorder may be cured by the alterations of the physical self? What new ones may arise?