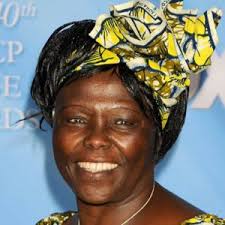 We cannot tire or give up. We owe it to the present and future generations of all species to rise up and walk! –Wangari Maathai

Maathai, A Champion of Peace and the Environment

Wangari Maathai was a woman of renown. She was the founder of the Green Belt Movement and the 2004 Nobel Peace Prize Laureate. In 2009 the United Nations Secretary-General named Wangari Maathai a UN Messenger of Peace with a focus on the environment and climate change because of her deep commitment to the environment. In 2010 Maathai was appointed to the Millennium Development Goals Advocacy Group. That same year Professor Maathai became a trustee of the Karura Forest Environmental Education Trust, which was established to safeguard the public land for whose protection she had fought for almost twenty years and, in partnership with the University of Nairobi, she founded the Wangari Maathai Institute for Peace and Environmental Studies.

Early Life, A Seed is Planted

Maathai was born in the Nyeri District in the central highlands of the colony of Kenya on April 1, 1940. When she was still a small child, her family moved to the Rift Valley. Her father worked on a farm owned by white land owners. During her childhood, the Mau Mau uprising occurred in which native Kenyans sought independence from the British. Maathai was safe from the violence because she had been sent to a Catholic boarding school at the age of 11 called St. Cecilia’s. Her family members were forced to move from their home to an emergency village in Ihithe.

While Maathai was at St. Cecilia’s she became fluent in English and converted to Catholicism. She also a member of the Legion of Mary. The group’s members vowed “to serve God by serving fellow human beings.”

Maathai was the first East African woman to receive a Ph.D. As colonialism came to an end in East Africa, Kenyan politicians looked for ways to make education available to promising students as an investment in the country’s future. They understood that education was necessary to build peace and prosperity. Senator John F. Kennedy agreed to work with Tom Mboya’s proposals and agreed to fund such a program through the Joseph P. Kennedy Jr. Foundation. Airlift Africa was born.

An exemplary student, in 1960 Maathai was given a scholarship to study biology at Mount St. Scholastica College in the US through Airlift Africa. She earned her masters of science degree at the University of Pittsburgh in biological sciences. While in Pittsburgh she learned about environmental restoration when local environmentalists advocated to reduce the levels of air pollution in the city.

Initially, after her masters degree Maathai returned to Nairobi to work as a research assistant to a professor of zoology at the University College of Nairobi. Upon her arrival in Nairobi she discovered her promised position had been given to someone else. Maathai speculated in her memoir titled “Unbowed” that this was due to her gender and tribal affiliations. Rather than beginning work in Nairobi, Maathai went to Munich where she worked as a research assistant in the microanatomy section in the Department of Veterinary Anatomy at the University of Giessen in Germany. Maathai also continued her studies and obtained her Ph.D in 1971 in veterinary anatomy from the University of Nairobi after studying at the University of Munich.

Because of her academic achievements, Maathai was appointed to several positions of seniority at Nairobi University. Maathai served as the chair of the Department of Veterinary Anatomy in 1976. She also taught at the university and held the position of associate professor. During this time period Maathai campaigned for equal benefits for women who worked for the University. She tried to change the academic staff association into a union to negotiate better benefits, but this effort was squashed.

She speaks for the Trees and People

During this time, Maathai noticed that environmental degradation negatively impacted the economic and social fortunes of Kenya. Not only was the deforestation responsible for landslips and droughts, the poor harvests and lack of rainwater in deforested areas created inter-tribal conflict as people fought for meager resources. She became convinced that protecting the environment would promote peace and solve economic problems. Wangari Maathai proposed creating a foundation to plant trees.

Maathai’s ideas led to the founding of Envirocare Ltd., a business that involved planting trees by ordinary people to conserve the environment. Her first tree nursery, Karura Forest, was created. Unfortunately Envirocare ran into funding problems. While her first attempt to create such a foundation was unsuccessful, Maathai’s efforts paid off in that she gained admittance to the 1976 UN conference on human settlements. At the conference, she advocated planting more trees to improve environmental, social and economic conditions.

Upon returning to Kenya, Maathai led a movement to plant trees throughout Kenya which was at first known as the “Save the Land Harambee”. This movement became known as the Green Belt movement. Maathai encouraged the women of Kenya to plant tree nurseries throughout the country, searching nearby forests for seeds to grow native trees. She agreed to pay the women a small stipend for each seedling which was later planted elsewhere. The Green Belt movement has become a prominent environmental organization supporting the planting and conservation of trees. In her book, “Replenishing the Earth: Spiritual Values for Healing Ourselves and the World” Maathai wrote about, “the importance of communities taking responsibility for their actions and mobilizing to address their local needs.” She further added,

“We all need to work hard to make a difference in our neighborhoods, regions, and countries, and in the world as a whole. That means making sure we work hard, collaborate with each other, and make ourselves better agents to change.”

In January 1992, Maathai and other pro-democracy activists in Kenya learned they were on a list and targeted to be assassinated. A government sponsored coup was possible. Frightened, but undaunted, the pro-democracy group Maathai belonged to, which was known as the Forum for the Restoration of Democracy, took the information they had to the international media and called for a general election. As a result one of the members of the group was immediately arrested. Maathai barricaded herself in her house and was besieged for three days. At the end of the three days, the police cut through the bars on Maathai’s windows and arrested her. She and the other pro-democracy advocates were charged with spreading malicious rumors, sedition and treason. They were brought to “trial” and then released on bail.

While on bail, Maathai, along with other protesters, went on hunger strike to protest the government building on Uhuru Park. After a few days the protesters were violently removed. Maathai was hospitalized. The attack on the protesters drew international criticism. The protest grew and continued. Moving to the All Saints Cathedral across from Uhuru Park, the protest continued until the original protesters were all released in early 1993. In her memoir titled “Unbowed” Maathai wrote:

“It is often difficult to describe to those who live in a free society what life is like in an authoritarian regime. You don’t know who to trust. You worry that you, your family, or your friends will be arrested and jailed without due process. The fear of political violence or death, whether through direct assassinations or targeted “accidents”, is constant. Such was the case in Kenya, especially during the 1990s.

Praise for Her Activism

While Kenya was still in turmoil, the country was not ignore and neither were Maathai’s efforts. From 1991 through 1992, Maathai received international praise for her activism in Kenya. She received the Goldman Environmental Prize and the Hunger Project’s Africa Prize for Leadership in 1991. In June 1992, during the protests at Uhuru Park, Maathai was chosen to be a chief spokesperson at the UN Conference on Environment and Development in Rio de Janeiro despite the Kenyan government’s accusation that Maathai incited women and encouraged them to strip. The Kenyan government wanted her silenced.

Throughout the 1990s, Wangari Maathai and others protested for peace. Maathai opposed more than once the seizure of public lands by the government who wished to give the lands to private, corporate interests. Once, she and her followers were attacked during such a protest as they planted a tree on public land that the government wished to give to private interests to develop a golf course. While the police refused to arrest the individuals who attacked Maathai and her group, the attack had been filmed and was released to the international press.

During these troubles, Maathai recognized the importance of environmentalism and democracy. Unrelenting and holding on to her vision, Maathai continued on. She planted trees. And she was beaten and arrested. And she planted more trees.

As a result of her efforts, democracy in Kenya grew. Wangari Maathai served first as a vice president for the Movement for Free and Fair Elections and then campaigned for the Kenyan parliament in the 2002 elections as a candidate for the National Rainbow Coalition. Her party won, defeating the Kenyan African National Union.  Maathai was appointed Assistant Minister for Environment and Natural Resources.

After so many years of conflict and perseverance, Wangari Maathai was awarded the 2004 Nobel Peace Prize for her “contribution to sustainable development, democracy and peace”. She became the first African woman, and the first environmentalist, to win the prize.

In conclusion, Wangari Maathai died on September 25, 2011. In her lifetime she spearheaded the United Nations Billion Tree Campaign. She was a founder of the Nobel Women’s Initiative. Ever planting trees, she planted a tree in Uhuru Park with President Obama as he called for the freedom of the press to be respected. She was a peace hero.