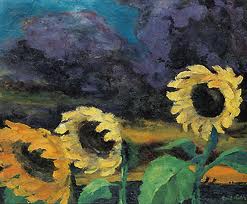 You can almost feel the wind blowing the flowers in an Emil Nolde painting. The canvases are alive with vibrancy and turmoil. Emil Nolde was a controversial figure. Born near Nolde, Denmark, Emil Hansen did not feel that farm life was for him. He tried his hand at wood carving, furniture making, and being a drawing instructor. At the age of 31, he found his calling and began to pursue a career in art. When the Munich Academy of Fine Arts turned him down for admission to study, he continued to purse becoming an artist by taking private lessons, visiting Paris, and becoming familiar with the Impressionists movement which was popular at the time. The works of Vincent Van Gogh he found fascinating and he painted many paintings of bold flowers. 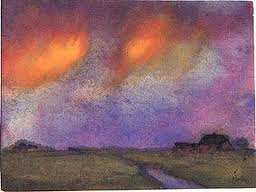 Much of his life, Emil Nolde had difficulties with the various groups that he joined. He was briefly a member of the Expressionists group, Die Brucke. In the 1920’s he supported the Nazi party and expressed negative opinions about Jewish artists– a choice that I can only imagine he must have regretted. Nolde’s style was very bold. He was known for his expressive choice of colors. Golden yellows and deep reds make luminous otherwise somber tones within his paintings. His watercolors churn and include vivid, brooding storm-scapes and brilliant florals. Because Nolde painted in the modern style his work was labeled degenerate by Hitler and over a thousand of his paintings were removed from museums and galleries. He was forbidden to paint even in private until 1941. Passionate about art, he still painted and hid his works, calling them the “Unpainted Pictures.”

In 1942, Nolde wrote a statement that rings very true to me. He wrote: “There is silver blue, sky blue and thunder blue. Every colour holds within it a soul, which makes me happy or repels me, and which acts as a stimulus. To a person who has no art in him, colours are colours, tones tones…and that is all. All their consequences for the human spirit, which range between heaven to hell, just go unnoticed.” I remember this statement when I see a Nolde painting. 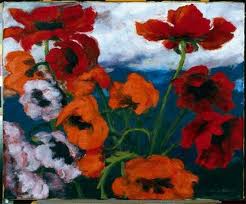 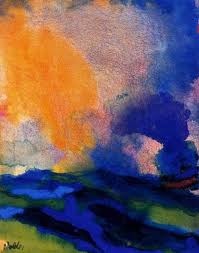