This evening I was thinking of the green leafy tops of strawberries. I love the way that they contrast with the red of the berry, the almost joyous motion of the curl of the leaves, and the way that they form around the ring of the stem. To my mind, the strawberry tops are an organic dance in miniature. This put in a frame of mind and I remembered Henri Matisse’s second version of The Dance.

I could almost envision the strawberry leaves touching delicate tips and dancing.

Matisse first studied law but then found his joy in painting when his mother brought him a set of art materials while he was recovering from appendicitis surgery. He was influenced by the work of Manet, Pissaro, and Chardin. Early in his career he made four copies of Chardin paintings that he studied in the Louvre. Matisse immersed himself in the works of others. He put himself into debt by acquiring such works of art as a plaster bust sculpted by Rodin, a drawing by Van Gogh, a painting by Gauguin, and Cezanne’s The Three Bathers.

While Matisse’s early work was very somber, he was one of the primary artists involved in Fauvism. Fauvism expressed emotion with wild, often dissonant colours, without regard for the subject’s natural colours. The movement lasted from about 1900 until 1910. Matisse opened one of the Fauvist exhibitions that he participated in with Woman With a Hat. 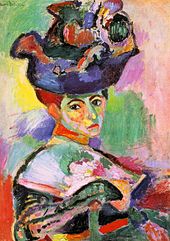 In 1906 Matisse met Pablo Picasso. The two became lifelong friends and rivals. They inspired one another and refined one another’s ideas of painting and composition. Their social circle also included Gertrude Stein and Henri Rousseau.

Later in Matisse’s life he published a book of his paper cutouts titled Jazz. In this book can be found his Blue Nude.

Matisse left a body of work that spans fifty years. His influence on the use of color and shape cannot be understated. His paintings and cutouts held a joie de vivre and true experimentation. Joyous as red strawberries in March.