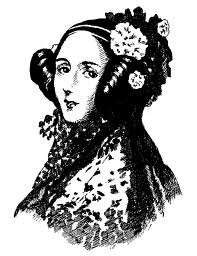 Augusta Ada King, Countess of Lovelace, was 26 years old when she wrote what would later be described as the first algorithm intended to be carried out by a machine and earning her the title of being the world’s first computer programmer. Lovelace described herself as an “Analyst and Metaphysician” and her approach as being “poetical science”.

Lovelace was the legitimate daughter of Lord Byron and his wife Anne Isabella “Annabella” Byron, nee Milbanke. All of Lord Byron’s other children were scandalously born out of wedlock. Lord Byron had wanted a boy and was disappointed that Lovelace was a girl. At his encouragement, Lovelace’s mother moved herself and the baby to her parents’ home while Ada was only one month old. Lord Byron signed separation papers shortly after; never attempted to gain custody of little Ada; and left England for good a few months later. Lovelace’s mother was bitter. She spoke frequently about Lord Byron’s depravity and immoral behavior. Lovelace’s mother encouraged her daughter’s mathematical interests in order to prevent Lovelace from developing the poetical insanity of her father. The sensational nature of the relationship between Lovelace’s mother and father made Ada famous in Victorian circles. Lovelace’s mother constantly feared that Lord Byron might try to obtain custody of Ada. While Annabella Milbanke had little interest in raising her daughter and left Ada to the care of her grandmother, Annabella did not want Lord Byron to have custody of the child. She wrote letters feigning interest in Ada. And told her mother to keep the letters in case they needed to argue for custody of Ada. Lady Annabella Milbanke’s stories about Lord Byron and “concerns” that her daughter might develop to be as depraved led to several of Lady Milbanke’s friends watching Ada closely as she became teenager for any signs of immoral behavior. Ada named these people “the Furies.”

In the midst of these emotionally difficult circumstances, Ada Lovelace grew up in her grandparents’ home. As a young child she was frequently ill. Despite her illnesses, Lovelace pursued her studies. She was privately tutored in mathematics and science by such Victorian intellectuals as: William Frend, Augustus De Morgan, and Mary Somerville. Frend was a radical social reformer. De Morgan was a reknowned British mathematician and logician. Somerville was a noted researcher and scientific author. When Lovelace was twelve, she decided she wanted to fly. She went about the project methodically—she studied the anatomy of birds; considered the length of their wingspan in proportion to their bodies, investigated different materials such as paper, wires and feathers; and she decided what equipment would be necessary for flight which included steam. She wrote a book, complete with illustration plates, about her investigation to create a flying machine. When Lovelace was seventeen, De Morgan wrote a letter to her mother stating that in his opinion Lovelace could become “an original mathematical investigator, perhaps of first-rate eminence.”

Lovelace was first introduced to Charles Babbage when she was seventeen years old. Lovelace’s prodigious mathematical abilities lead to her working with Charles Babbage on his Analytical Machine. He called her “The Enchantress of Numbers.”

Lovelace believed that intuition and imagination were important to use when employing mathematical and scientific concepts. Her creativity combined with intellectual ability allowed her to imagine creating a mathematical model of how the brain works. She could conceptualize leaps with mathematics, using mathematics to discern the unseen and test theories, creating diverse with mathematics.

In a paper she translated from the work of an Italian engineer on the Analytical Machine, Lovelace included her own elaborate set of notes, simply titled “Notes”. These notes included the algorithm– which was a complete method for using the Analytical Engine to calculate a sequence of Bernoulli numbers. If the algorithm had been run, it would have worked. Lovelace was a visionary. She could see applications of computers far beyond simply calculating numbers. She pondered heady questions such as how individuals and society relate to technology. She wrote

The Analytical Engine “might act upon other things besides number, were objects found whose fundamental relations could be expressed by those of the abstract science of operations, and which should be also susceptible of adaptations to the action of the operating notation and mechanism of the engine…

“Supposing, for instance, that the fundamental relations of pitched sounds in the science of harmony and of musical composition were susceptible of such expression and adaptations, the engine might compose elaborate and scientific pieces of music of any degree of complexity or extent.”

Lovelace died of uterine cancer when she was 36 years old. She was brilliant and far ahead of her time.