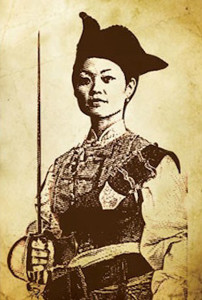 When we think of pirates, we might think of such men as Edward Teach, Black Bart, or Henry Morgan. Edward Teach, Blackbeard, commanded a fleet of four ships and over 300 pirates. Black Bart seized over 400 ships. Henry Morgan was the terror of the Caribbean in the 1600s. Their “accomplishments” pale in comparison to the most successful pirate of all—a woman named Ching Shih. Ching Shih is known to have commanded more then 300 junks manned by 20,000 to 40,000 pirates. Her Red Flag fleet, which was a coalition of pirate fleets, may have included upwards of 1800 ships manned by over 80,000 people. From 1807 until 1810 she dominated the South China Sea and a merchant ship could not sail anywhere from Korea to Malaysia without purchasing a license ensuring safe passage from her. She also “retired” from pirating, was allowed to keep her wealth, and lived to the ripe age of 69.

Ching Shih’s early life is mostly unknown. She was born in 1775 in Guangdong province. Her birth name may have been Shil Xiang Gu. Ching Shih means the “wife of Zheng Yi”. As a young woman she enters history as a Cantonese prostitute on one of the renowned floating brothels. In 1801, at the age of 26, she was captured by the notorious pirate Zheng Yi. He had fallen in love with her and set his pirates to raid the brothel and bring her back as his portion of the loot. Zheng Yi was from a lineage of pirates that extended back to the mid-seventeenth century. He commanded a fleet of several ships called the Red Flag Fleet. When she appeared before him, it is rumored that she scratched his face and refused to marry him unless he allowed her to co-command with him and to receive a share of the loot equal to his. Zheng Yi agreed.

With Ching Shih beside him, Zheng Yi’s fleet grew. By 1807, because of alliances that they made with the Cantonese Pirate Coalition and with another pirate named Wu Shi’er, 1700-1800 ships were at their command. And because of their successes, more and more pirate ships joined them. Then tragedy struck. Zheng Yi’s ship was caught in a typhoon and all aboard perished. Ching Shih, did not step aside. She offered to co-command with Zheng Yi’s second in command, a 21 year old man named Chang Pao who Zheng Yi had adopted as his son.

Ching Shih set up an ad hoc government to rule her pirates. She established a businesslike framework, which included taxes. Ching Shih set in place an absolute code of conduct that made the pirate code of the Spanish Main look tame. Disobeying an order would result in a pirate being beheaded. Stealing from the common plunder before it was accounted for and divided properly would result in being beheaded. Ugly women were set free. Beautiful women could be purchased for marriage and were expected to be treated appropriately. If a pirate ill-treated his wife he would be punished. Raping a woman meant death. Consensual sex while on duty meant beheading for the male pirate and the woman would be dropped into the ocean with cannon balls to weigh her down to the ocean floor. If a pirate or a pirate ship harassed a town, merchant, farmer or anyone that the Red Flag Fleet had an agreement with or received support from, the pirate or pirates would be beheaded. If a pirate tried to desert, their ears were chopped off to announce their humiliation as a coward.

Thinking beyond the norms, Ching Shih did not limit the raiding by her ships to the open sea. She used numerous shallow bottom boats to traverse up China’s rivers to raid towns inland. Two towns banded together to form a small fleet to try to defeat the Red Flag Fleet. They were annihilated.

For the Chinese Emperor this was a humiliation. He raised a naval fleet to attack Ching Shih’s fleet. Ching Shih met his fleet head on rather than run. She routed the Emperor’s navy. She captured 63 large ships and impressed thousands of recruits from his sailors by offering them the choice of joining with her or having their feet nailed to the deck and being beaten with clubs.

The Emperor of the Qing Dynasty was at a loss. He turned to the aid of the British and Portugese navies. He offered large sums of money to Dutch mercenary ships to defeat the Red Flag Fleet. These combined forces engaged with Ching Shih’s ships repeatedly. And were repeatedly defeated. No one sailed in the ocean waters where her fleet held sway without her permission and she was ruthless to those who tried.

In 1810, the Emperor offered her amnesty if she was willing to kneel before him as his subject. She refused these terms. The official who had performed her marriage ceremony when she became Zheng Yi’s wife offered a solution. He proposed that Ching Shih kneel before the Emperor not in subjugation but rather in thanks for allowing her to maintain her wealth and for the offer of amnesty. Ching Shih agreed and negotiated a peace with the Emperor. Her fleet was to disband, her ships were to be given up, and amnesty was extended to all pirates under her command except 376 individuals who were brought up on various other crimes. Ching Shih also negotiated for herself that she was to be given an aristocratic title, “Lady by Imperial Decree”, which entitled her to various legal protections.

Ching Shih retired at the age of 35. She settled down at first with Chang Pao and they had a son. When he died unexpectedly, she moved to the countryside and opened a gambling house and brothel. She lived to the age of 69 and had a grandson. Ching Shih made her way in a dangerous world. She seized every opportunity, went beyond anyone’s expectations of what was possible, and lived well.