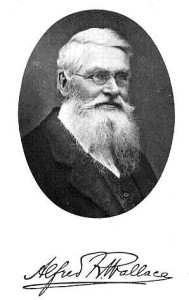 Most people have heard of Charles Darwin and “On the Origin of Species” which he wrote to put forth the ideas of evolution, natural selection, and the transmutation of species. Evolution as a concept was a radical notion because it ran counter to the idea that all species had been created immutable by the Christian god. For the time period this was a revolutionary idea.

Few people know however that the idea of the transmutation of species had been around for quite some time. It had been proposed by such scientific minds of the time as Jean Baptiste Lamarck, Erasmus Darwin, Geoffroy Sainte-Hilaire, and Robert Grant among others. It was considered somewhat of a fringe idea. A radical notion. Many traveling naturalists like Alfred Russel Wallace believed in the transmutation of species.

Wallace was a self made Englishman of Scottish descent who was born in Wales. At various times he worked as a surveyor, a civil engineer, an architect, and a teacher of drawing, mapmaking, and surveying. While he was employed as a teacher he spent a great deal of time in the Leicester library where he met entomologist Henry Bates who had recently written a paper about beetles. Bates introduced Wallace to the idea of collecting and studying insects. This friendship continued for a very long time and when Wallace decided that he wanted to travel abroad as a naturalist, he and Bates traveled together to Brazil. Their plan was to collect specimens in the Amazon rainforest to sell to collectors in the UK. They also wanted to gather data to support the idea of the transmutation of species.

After of number of years traveling in South America, Wallace decided to head back to the UK. The boat that he was on caught fire and all of his specimens were lost except those that he had sent on ahead. Despite that he was able to only salvage a portion of his diaries, he wrote six scientific papers and two books. From here he made contacts with a number of prominent naturalists. The most notable of these being Charles Darwin.

Charles Darwin was gravely aware that the theories behind evolution and natural selection were extraordinarily controversial. He had written a treatise on his ideas that he wrapped in paper, sealed, and put away in a closet under his stairs. It was not to be published until after his death and he had provided resources for its publication.

And then he received a correspondence from Wallace, who was now traveling in Malay and who had continued to write about the transmutation of species, outlining many of the theories that he had already written about and that were hidden under the stairs. Wallace was asking Darwin to review what he had written and if he thought it was good enough, Wallace was asking Darwin to recommend it to Sir Charles Lyell.

Lyell’s belief in the immutability of species had already been shaken by a previous paper that Wallace had written. Darwin showed what Wallace had written to Joseph Hooker and to Lyell who encouraged him to publish prior to Wallace to establish being the first to think of the ideas. Darwin sent the manuscript to Charles Lyell with a letter saying “he could not have made a better short abstract! Even his terms now stand as heads of my chapters … he does not say he wishes me to publish, but I shall, of course, at once write and offer to send to any journal.” After this while Darwin dealt with family issues, Charles Lyell and Joseph Hooker decided to publish Wallace’s essay in a joint presentation together with Darwin’s unpublished writings which highlighted Darwin’s priority. Wallace, who was in Malay at the time when the presentation was given to the Linnean Society, accepted everything happily– after the fact. While having the papers presented jointly relegated Wallace to the position of “co-discover”, it also associated him with Charles Darwin who was more widely known and respected. Further, Wallace was not in the same societal class as Darwin, Lyell, and Hooker. Being associated with Darwin gave Wallace access to the highest levels of the scientific community.

While Darwin and Wallace’s ideas were presented together, there were some important differences. Darwin emphasised competition between individuals of the same species to survive and reproduce. Wallace thought the idea that environmental pressures on varieties and species forcing them to become adapted to their local environment was more important. Wallace discovered the so-called Wallace line that runs through Indonesia and divides the region into two distinct parts. One area has more species that are similar to the species on Australia and the other region has species similar to those of Asia. Wallace is sometimes called “the father of biogeography.”

Some scholars, such as Gregory Bateson the preeminent anthropologist and cybernetician, have pointed out that another difference between the ideas of the two men is that Wallace appeared to have envisioned natural selection as a kind of feedback mechanism keeping species and varieties adapted to their environment. Wallace wrote:

“The action of this principle is exactly like that of the centrifugal governor of the steam engine, which checks and corrects any irregularities almost before they become evident; and in like manner no unbalanced deficiency in the animal kingdom can ever reach any conspicuous magnitude, because it would make itself felt at the very first step, by rendering existence difficult and extinction almost sure soon to follow.”

Gregory Bateson wrote that he thought Wallace had “probably said the most powerful thing that’d been said in the 19th Century”. Scientist and theoreticians are still exploring the connections between natural selection and systems theory.

Wallace was intelligent, open minded, and revolutionary in his thoughts. He advocated for land reform and socialism. He opposed social Darwinism and eugenics. He was an environmentalist and a spiritualist. He supported women’s suffrage and wrote about the wastefulness of militarism. He was a man ahead of his time.