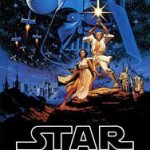 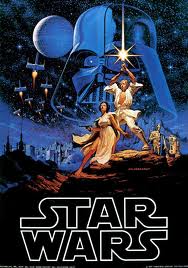 In May of 1977 a rather low budget science fiction film was released. It was originally contracted as a two movie deal with the film American Graffiti. It went through multiple drafts of its screenplay and was originally titled “Adventures of Luke Starkiller, as taken from the Journal of the Whills, Saga I: The Star Wars”– a rather long winded title that George Lucas later shortened down to Star Wars.

I didn’t see the film early in May, but word of it spread quite quickly. I can remember being a kid and playing in my best friend’s yard with Barbie dolls and she told me about this movie that she had gotten to go see at the movie theater. She told me about Luke Skywalker, Obi Wan Kenobi, R2D2, C3PO, and Princess Leia. That afternoon we didn’t play the usual game of house with our Barbie dolls. This time our Barbies and Ken were part of a more elaborate fantasy story involving space ships and sword play and more. I followed Cheryl’s lead on the story and was mesmerized. I went home and asked my mother to take me to the movies.

For the next several weeks I heard more and more stories about this movie from the other kids. Pretend play in Cheryl’s neighborhood became focused on Star Wars. I remember the giant swinging rope of the hill by the mulberry tree became a great chasm that we had to swing across to evade the storm troopers. Sticks became light sabers. I went home and asked my mother to take me to the movies.

It was mid-July and hot. Very hot. My mother worked as a cook and waitress for my grandmother’s restaurant. She didn’t like to go to the movies. Sometimes my aunt would take my cousins and I to the movies. She had a preference for nature programs (and I owe my fondness for ocelots to her) and the last one I could remember Aunt Janet taking us to was a double feature with the Disney version of Robin Hood and a nature film about the animals of North America. I still hadn’t seen Star Wars and now the kids were not simply talking about seeing the film, they were comparing how many times they had seen it. It was a bit comparable to the part in Willy Wonka and the Chocolate Factory where all of the kids have bought hundreds of Wonka bars except for Charlie. I felt like Charlie. I wanted to see the film so bad. Finally there was an afternoon that was as hot as a humid afternoon in Michigan can get. The kind of afternoon preceding a thunderstorm where the humidity is so high that sweat has little effect and the air is so stifling that you cannot breathe. My mother was complaining about the heat when she got off work. I suggested that we go to the movie theater to see the movie. The movie theater where they had not only popcorn and Star Warsbut also air conditioning. She agreed to go and we went.

The afternoon was magic. The theater was packed and we sat near the back. In retrospect this was pretty remarkable for an afternoon matinee for a film that had been out for a couple months, but that was the type of blockbuster that Star Wars was. I sat with my popcorn in absolute awe for two hours and when the Millenium Falcon came over the curve of the Death Star and Han Solo told Luke to go ahead with his mission, a huge cheer went up in the theater. People hooted, hoorayed, and clapped when the Death Star blew up. People were applauding and crying at the final scene where Princess Leia awards metals to Luke and Han.

The movie simply made people feel good. It gave them something to cheer about. It was not an overly complicated plot. Farm boy discovers long lost heritage and defeats the enemy. It did not have dark complexities. It was about good versus evil. It might have been just the right movie for the time period. A time period before the hostage crisis in Iran, Reagan, and the Bush Dynasty. A time when it felt like there was hope and a farm boy could on a wing and a prayer defeat the oppressors.

That fall most kids I knew dressed up for Halloween as some character from Star Wars. There were some very inventive R2D2 costumes. Flashlights were sold that looked like light sabers. I was envious of Cheryl’s Princess Leia costume that her mother had made from a pattern. I bought a May the Force Be With You button. This button lived for many years in one of my drawers. It was like a talisman that brought back good memories– memories of seeing Star Wars in the summer of 1977. I think I have moved too many times and I don’t know it’s location anymore. I may still have it. It doesn’t really matter because thinking about the button and remembering the first time I saw the movie brings back the happy nostalgic feeling.

It makes me smile to wish anyone reading this reminiscent post– “May the Force Be With You!”