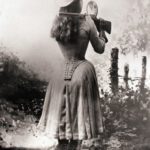 Uppity Women: Annie Oakley. Oakley was a sharp shooter who traveled with Buffalo Bill’s Wild West show. In 1889, she performed at the Paris Exposition as part of a three year tour. This tour made her America’s first international star. While this feat in and of itself would make her worthy of note as an extraordinary woman, Oakley was a person of integrity who advocated for women. 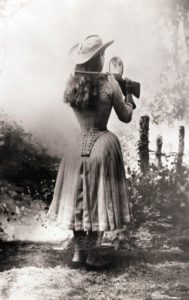 From Difficult and Humble Origins

Oakley, born on August 13, 1860, was christened Phoebe Ann Mosey. The log cabin of her birth was near the rural western border of Ohio about five miles east of North Star. Her parents were Quakers from Pennsylvania who had moved to a rented farm.

Oakley was the fifth out of seven surviving children. Her father died when she was six of pneumonia after suffering overexposure during a blizzard the previous year. While her mother remarried, her step-father died shortly after the birth of yet another sibling. The family plunged into extreme poverty.

While her mother tried to keep the family together, too many mouths needed food. Oakley did what she could as a young child. She began trapping animals at the age of seven. She hunted before the age of nine. At the age of nine, Oakley along with one of her sisters was admitted to the Darke County Infirmary. While in the care of the superintendent of the infirmary and his wife, she learned to sew.

Because of her developing domestic skills, a few months after coming to live at the Darke County Infirmary Oakley was “bound” out to a local family to help care for their infant. The family originally wanted someone who could do more hard labor around the farm. Oakley suffered two years in near slavery to this family whom she only referred to as “the wolves” in her autobiography. At one point, the wife of the family forced Oakley outside into the freezing cold without shoes because Oakley had fallen asleep while darning. With good cause, Oakley ran away.

Skill, Her Debut, and Love

Oakley made her way back to her mother and her family. Her mother had remarried once again. Oakley’s skill in hunting helped to pay the mortgage on her mother’s farm. Annie became well-known throughout the area for her marksmanship.

Frank E. Butler was a traveling show marksman. He placed a $100 bet with Cincinnati hotel owner Jack Frost that he could beat anyone in a contest of sharpshooting. Frost arranged a match between Oakley and Butler. Butler was surprised to find himself pitted against a five foot tall, fifteen year old girl. And even more surprised when after 25 rounds, she beat him.

It was love at first site and Butler courted Oakley. A year later they were married.

Butler and Oakley, who took the name Annie Oakley as a stage name in 1885, began touring with Buffalo Bill’s Wild West Show. Fellow performer Sitting Bull called her “Watanya Cicilla”  which meant “Little Sure Shot”. While she toured with the show, she had a rivalry with Lillian Smith who was eleven years her junior. Oakley was often described as five to six years younger than she really was, perhaps because of the rivalry with the younger Smith.

At one point Oakley stopped touring for a few years, but then resumed in time for the Paris Exposition. Oakley was the highest paid performer in the Wild West show. While touring in Europe she performed for Queen Victoria, President Marie Francois Sadi Carnot of France, and King Umberto of Italy. It is rumored that at the request of German Kaiser Wilhelm II she shot the ashes off of his lit cigarette.

An Advocate for Women

Oakley was a strong woman. She believed women were equal to men and she promoted the service of women in combat operations in the armed forces. During the Spanish-American War she sent a letter to President William McKinley proposing a company of 50 female sharp shooters go to war as part of the United States armed services. This proposal was not enacted. However, throughout Oakley’s career it is estimated she taught 15,000 women how to use a gun.

A Woman of Integrity

While the story of a cocaine abusing Oakley splashed across headlines and sold newspapers, it was false. Too late to realize the story was false, many newspapers ran with the Hearst article. Hearst trying to avoid a libel suit sent an investigator to Darke County Ohio to dig up dirt on Oakley. The investigator found nothing. Oakley went hunting to clear her reputation.

For the next six years, Oakley pursued winning 54 of 55 libel lawsuits against newspapers who had printed the Hearst story. It cost her more money than she collected in judgments. However, she felt it was important for the truth to be represented and her reputation restored.

Oakley won marksmanship awards and set records into her sixties. She thrived beyond a train accident that forced her to change careers to become an actress and a car accident that forced her to wear a steel brace. She continued to advocate for women and was a philanthropist for women’s causes. Her health declined in 1925 and she died a legend in 1926. The famed female sharpshooter was not hemmed in by her time period despite her careful cultivation of her image as a woman with proper Victorian morals. She lived as a daredevil who pushed boundaries, did more, and fearlessly went ahead of her time. She was a true uppity woman.