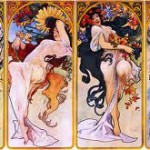 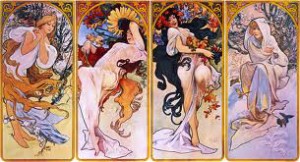 During the Christmas season of 1894, Alphonse Mucha happened to wander into a print shop that was in sudden and desperate need of an advertising poster for a new play that featured Sarah Bernhardt. Sarah Bernhardt has been referred to as the most famous actress of all times. Flamboyant “Divine Sarah” traveled with her own coffin that she occasionally slept in to better understand the tragic roles she portrayed and she was to appear in the play Gismonda at the Theatre de la Renaissance. Mucha said that he would produce a lithographed poster within 2 weeks for the play. Bernhardt was so taken with Mucha’s work that she contracted with him for six years to produce advertisements for her plays.

This was not the start of Alphonse Mucha’s career, but it was the start of the the Mucha Style that later became known as Art Nouveau. Mucha was born in Ivancice, Moravia. He lived there until 1879 when he moved to Vienna to work in a theatrical design company. After his employer’s business suffered a catastrophic fire he moved back to Moravia where Count Karl Khuen of Mikulov hired him to decorate his castle with murals. The Count was so impressed with Mucha’s work that he sponsored him to study at the Munich Academy of Fine Arts. In 1887 Mucha moved to Paris and studied at the Academie Julian and Academie Colarossi. After this the fateful opportunity to create the poster for Sarah Bernhardt occurred. 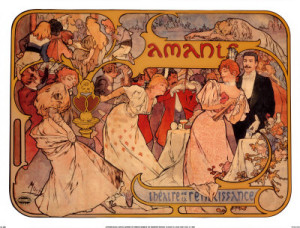 The Universal Exhibition that was held in Paris in 1900 made the Mucha style more widely known. Many imitators followed Mucha’s style of soft pastels, flowing neoclassical robes, flowers, and organic lines. Mucha often tried to disassociate himself from the Art Nouveau style that he helped to create. He passionately believed that art existed to communicate a spiritual message. 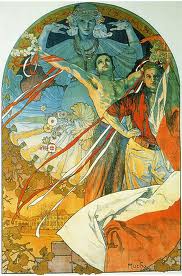 After four years in the United States from 1906-1910, he and his family moved to Prague. He focused his talents on creating art that was a testament to Slavic nationalism and depicted Slavic history. Mucha created art work in Prague such as murals to decorate the Theater of Fine Arts, postage stamps, and money. His masterpiece took several years to create and was 20 huge paintings depicting the history of the Slavic people.

In the late 1930’s Mucha’s works were denounced as “reactionary” in an atmosphere of increasing fascism. In the spring of 1939 when German troops marched into Czechoslovakia, Mucha was arrested by the Gestapo. He was jailed and interrogated. While he was undergoing this ordeal he caught pneumonia. At that time he was not a young man. He was released, but in July 1939 he died of a lung infection.

Mucha’s advertisements and posters were in contrast to what was typically being printed at the time. He used much softer colors. His flowing lines and organic compositions are dynamic and graceful. His work brought a sense of artistry and beauty to the most mundane of things– biscuit cans, soap packaging, infant formula, etc. His style was distinctive enough, even though it found its humble origins on theater posters, that it created a whole art movement.

From July 14, 2012 until December 31, 2012, the Mucha Foundation will be presenting the largest exhibition of Mucha’s works in the United States since 1998 at the National Czech and Slovak Museum and Library in Cedar Rapids, Iowa. For more information please visit the Mucha Foundation website at: http://www.muchafoundation.org/MHome.aspx 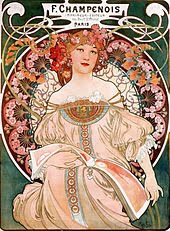 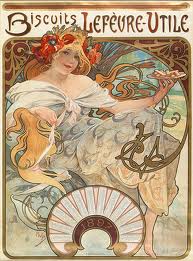