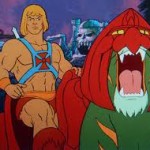 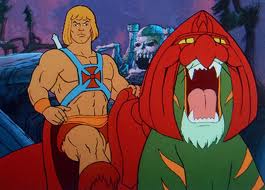 Cartoon writing prompts! More writing prompts to hopefully get your creative ideas flowing like a river through a manhole cover down the gorge to Frankenstein Monster’s castle or to pedal in mid-air or to survive blowing up with TNT!

2. Your point of view character is the neighbor of Fred and Wilma Flintstone, on the other side away from the Rubles. Write a story in this scenario that involves the Flintstones.

3. Cartoons have their own physics and reality. Write a story that utilizes cartoon physics. How would a battle between a cartoon hero and a cartoon villain go? What interesting implements and weapons could materialize out of nowhere? How could gravity be defied in some new and interesting ways?

4. Write a story with He-man as the main character. Who would he rescue? What would be the story? What if he had to compete for She-Ra’s love with an English professor? Write a story where She-Ra takes He-man to the barber for a haircut.

5. Cinderella and her mice marry the prince and move into the castle. Tell what happens to this Disney princess and her Prince Charming after the wedding. Or pick another Disney Princess. What does happily-ever-after mean?

Have fun with these! More writing prompts can be found on Jo-anne Odell’s blog at http://www.jmodell.blogspot.com/2012/01/twelve-drummers-drumming.html