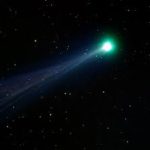 Comets and Uppity Women. While these two things have little in common, Bathsua Makin said,

“A learned woman is thought to be a comet, that bodes mischief whenever it appears.”

I recently read an article in The Guardian about a study of contemporary hunter-gatherer societies conducted by anthropologists at University College London. The Guardian quoted one of the authors of the study as saying, “There is still this wider perception that hunter-gatherers are more macho or male-dominated. We’d argue it was only with the emergence of agriculture, when people could start to accumulate resources, that inequality emerged.”

For a long time anthropologists puzzled over the discrepancy that while people in hunter-gatherer societies show preferences for living with family members, in practice the groups they live in contain few closely related individuals. The study focused on computer simulations based on the assumption people prefer to live with their close kin– siblings, parents and children. When the choice was male dominated, the simulation showed a pattern closer to male-dominated pastoral or horticultural societies. A more sexually egalitarian choice provided a different pattern. This pattern closely resembled the observed pattern of the contemporary hunter-gatherers. And showed each hunter-gatherer group has far flung connections with many different hunter-gatherer groups.

Because of this information the authors of the paper made a case for sexual equality as an evolutionary advantage for humans. They argued that early humans implementing a more sexually egalitarian model would have had wider networks to interact with. Further, the advent of agriculture skewed our species towards male dominance. Accumulating possessions and wealth accompanied agriculture and possessions and wealth needed protection. Agriculture meant groupings of men living with their brothers and strong male relatives. The men’s wives resided at the fringes of the group. As a result, the man’s children and relatives outnumbered the relatives within the group of any adult female member. Women lost their voices.

Continuing, women lost their voices and many were forgotten through history. For instance, how many other unknown Boudica lead armies? What adventuresome women inspired tales that are no longer told? How many engineering accomplishments ascribed to men were created by women? How many ghosts of women’s lost works haunt history? In addition, can we continue with only a portion of the story? Lastly, can we survive with only a portion of humanity’s possible contributions?

Women in History and Feminism

A history of women in this one post is impossible. Powerful women, strong feminine voices, and human females existed all through out history. And not all of them are famous like Cleopatra, the last Ptolemaic pharaoh of Egypt before Egypt became a Roman province. Or Queen Elizabeth I, the last monarch of the Tudor dynasty. History books list the accomplishments of men, but are silent about the accomplished, outspoken, adventuresome, powerful or extraordinary women in history. I have written posts about several of women in the past on this blog. Women such as Ching Shih, Ada Lovelace, Grandy Nanny, and Queen Nzinga Mbande.

Further, a tradition of female intellectual resistance to oppression and repressive cultural norms winds back centuries. This tradition includes women such as Christine de Pizan, Mary Wollstonecraft, Virginia Woolf and many others. I opened this post with a quote from Bathsua Makin…

Bathsua Makin, the daughter of a schoolmaster named Henry Reginald, benefited from his progressive beliefs. She was born in an age when girls were supposed to only learn “feminine” arts, but Bathsua’s father believed differently. Feminine arts included activities such as dancing, singing and needle crafts. He trained his daughter in classical and modern languages. Bathsua Makin wrote a book of poetry at the age of sixteen that included passages in Greek, Latin and French.

During the seventeenth century in English culture, men dominated women in regards to the family, finances, education and religion. Queen Elizabeth’s reign shook things up and during her reign women enjoyed more freedoms. However with the ascendancy to the throne of James I,  previous societal patterns returned, with one exception. Protestantism encouraged literacy–reading and interpreting the Bible for themselves became the moral obligation of everyone. And this included women. More women stretched societal norms and read. Even though women lived in the private, domestic sphere where they were under the governance of the men of the household, an undercurrent challenging this norm flowed in English society. While a man who published his writings and took on a public voice enjoyed his celebrity, women were scorned for such an action. And still women such as Makin published.

Makin lived a not entirely easy life. Considered “England’s most learned lady”, she still struggled financially. Her husband, Richard Makin, who was a minor court servant, lost his position. When this happened, Bathsua successfully petitioned for a position. She tutored Princess Elizabeth, the daughter of Charles I, and taught the girl mathematics, reading, writing and languages. After the death of the princess, Makin tutored Lucy Hastings, Dowager Countess of Huntingdon.

Makin understood the power of educating women. For ten years she ran a school at Tottenham High Cross. She advocated teaching women a broad range of subjects including mathematics, history, science and languages. Living until the age of 75, her life influenced many others in small and important ways. Knowing the total impact of her work is not possible. She wrote that educating women would give “the whole nation advantage”.

It has been a while since I wrote about women through history who did unexpected, extraordinary, revolutionary things. Everybody needs role models. I feel society has taken steps backwards towards less egalitarianism and moved towards being more male dominated. In my opinion this development hurts our species. The challenges of our current time period require all the talent, hearts and minds available to us. As women we need to know women before us pushed boundaries, spoke out, and contributed. If writing about these women is mischief, then I will strive to be a maker of such. Look for another post next Sunday.