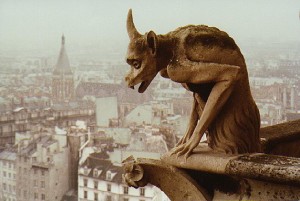 “What are these fantastic monsters doing in the cloisters before the eyes of the brothers as they read? What is the meaning of these unclean monkeys, these strange savage lions, and monsters? To what purpose are here placed these creatures, half beast, half man, or these spotted tigers? I see several bodies with one head and several heads with one body. Here is a quadruped with a serpent’s head, there a fish with a quadruped’s head, then again an animal half horse, half goat… Surely if we do not blush for such absurdities, we should at least regret what we have spent on them.” St. Bernard of Clairvaux

Gargoyles are the fantastic carved statuary that adorn temples and cathedrals. Some look like elongated monsters and creatures from a nightmare induced by pickled cabbage and too much sour beer. Often they bring a bit of whimsy and a certain reminder of the horrors of a potential fiery afterlife, but they served a very important purpose for the buildings that they were placed upon. They were downspouts. They collected rainwater and runoff and spat it away from the stone masonry of the building. Buildings made of stone were built using mortar between the rocks and water running down the sides of the buildings would eat away the mortar and weaken the buildings.

There is a legend that I think might make the basis for a pretty cool fantasy about the first gargoyle. Back in the Dark Ages in the region of Rouen there was a chancellor to one of the Merovingian kings who saved the countryside from La Gargouille who had batlike wings, a long neck, and the ability to breathe fire from its mouth. After hacking the dragon to bits St. Romanus as he is called could not get rid of the fire tempered head and throat and so it was used on the church to scare off evil demons and protect the church. Because St. Romanus was accompanied by a volunteer who was a condemned man on St. Romanus’ day it is the custom to set one prisoner free.

Of course gargoyles predate the medieval Dark Ages. There were lion-headed spouts on the Temple of Zeus, 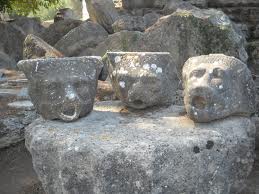 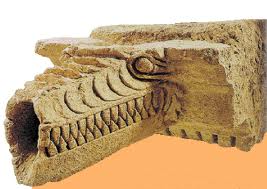 and some gargoyles evidenced a sense of humor such as this Hellenistic water spout of a servant from Afghanistan. 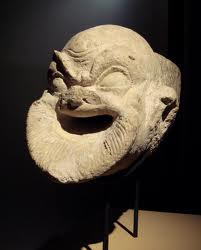 So many of our modern buildings are built with little imagination. And we have lost the past sense of building public structures that are meant not only to be serviceable but beautiful and add distinctive character to an area. I like the freely artistic sense that these gargoyles brought to their buildings. They weren’t just a piece of pipe. They had character. That little extra that made something unique.