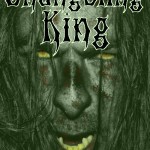 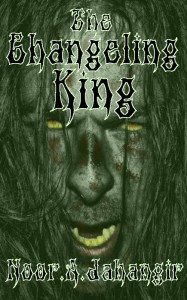 I had the chance to interview Noor A. Jahangir who is an up and coming fantasy author. He has just released in ebook format the first book in a young adult series. The book is titled The Changeling King.

1. Please describe a little bit about your new book, The Changeling King.

The Changeling King is a fantasy adventure story that combines elements of urban fantasy with traditional epic fantasy tropes. It starts with the arrival of Vasch and his warband of trolls through a mystical gateway, somewhere in the Pennine Moors in North West England. Vasch has been sent on a mission to kill or capture a boy called Adam, because of who he will become. The opening of the gateway sends a rush of energy down a layline and activates a second gate that has been buried beneath a lake for hundreds of years. Nathan Celic, his brother and their girlfriends have come to the lake to cool off and make out. The gateway sucks them through and they wake to find themselves in another world, held prisoner by a race of people called the Alvorn. Meanwhile, a traumatised Adam Phelps, having witnessed his sister’s and friends disappearance is taken into protective custody by Detective Karen Rainbow as a series of brutal murders begin to occur around him.

2. Your new book, The Changeling King, is a fantasy novel about a set of teenagers who find themselves transported from one dimension to another. Where did you find the elements to base your fantasy setting on? How do you go about creating fantasy worlds that will seem realistic to readers?

It is said that J R R Tolkien set out to make Middle-Earth as real as the real world. In fact, I strongly believe that in fantasy and sf, the world/environment needs to feel more real than it would need to in any other genre. So obviously you start with familiar elements like trees, rivers and mountains, but you mess with them a little to make them slightly unfamiliar, e.g. the sky over Kryllon is lilac, instead of that lovely blue we all love, based on how the sun interacts with the slightly different makeup of gases in my world’s stratosphere. Another example is that in the forest of Alvorn Reach, oaks and conifers stand alongside giants that make Dawn Redwoods look small. Also there is the architecture of the world, e.g. the Alvorn use magic to encourage and shape wood, stone and marble into organic shapes and use amber for windows and doors. Kryllon also has a compliment of regular flora and fauna, but also is home to Nicors, land-bound dragons with snaking necks, powerful legs adapted for moving through wetlands, swimming and clambering over rocks.
The Socio-Cultural environment, I think, also plays a big part in creating a setting. The peoples of my fantasy world celebrate various festivals, have religious affiliations, have social norms and feature a number of political undercurrents. The Alvor have a superiority complex, they have a caste system and varied complexions. The Dvargar originated on our planet, a fact hinted at it in their names and the name of their council, the Reichstag. Names play a major clue to the different origins of the different peoples in my fantasy world. The goblins have a shamanic tradition and the trolls are in an Ice-Age equivalent level of development. All of these factors add up to create a fantastic and yet believable world . . . I hope.

I think sometimes I may subconsciously borrow a personality trait from a person I know, but for most part, I’d like to think that I invent people completely from my imagination. Many of my characters start off as a place-fixer for the plot, then are graced with a name reflecting their ethnicity and race and a very sketchy bio. Major characters seem to develop a life of their own, but often characters feel like they are clones of each other or just cardboard cut outs. Giving them a back-story, personal objectives, aspirations and emotional context, as well as character strengths and flaws helps me understand them better, and hopefully, makes them read like individuals with a life beyond the pages of my book. My current favorite is the troll Vasch. He is what orientalists would call a noble-savage. Looking beyond the fact that he is a troll (and comes with all the nasty habits of one, e.g. cannibalism and a penchant for sorting things out through violence) he is loyal to his liege and troops, takes responsibility for his decisions and wouldn’t ask his troops to do anything he isn’t willing to do himself. But most of all its the fact that he is homesick most of time but also wonder-struck by the strangeness of Earth.

4. What types of fiction do you like to read? If there is a book that has influenced you more than any other, what was it and how did it influence you? Do you have to consciously try not to imitate it?

I mostly read fantasy, but occasionally branch out into other genres, sf, horror and the odd thriller. I’ll even read the odd literary novel when one takes my fancy enough. The Lion, the Witch and the Wardrobe is a literary influence that is hard to get away from, but it isn’t the only crossover novel/story out there any more. The 80s Dungeons and Dragons cartoons are another example of this and had a biggish impact in my formative years. I hate it when I come across something similar to my book. I almost had a nervous breakdown when I read the blurb to a book titled The Hickory Staff, because it sounded so similar to mine. Of course, it was quite different once I read it. Originally, my book was titled Trollking, but then I discovered that in the time its taken me to complete the first book, someone else has published a book titled The Troll King. So to disambiguate mine from his, I changed the title to The Changeling King. But in the end, there is only so much you can do.

There are authors whose work I love Raymond Feist, Janny Wurts, George R R Martin, Lian Hearn, Brent Weeks, etc, etc. There are authors who I really look up to for various reasons, including Neil Gaiman, Stephen King and David Farland. But I particularly admire and look up two authors. The late David Gemmell, because I love every single book he’s written (even the one’s that compared to his other works aren’t as good) and because his characters are so brilliantly human and yet the stuff of legends. The other author is J K Rowling, though I hate the fact that I’m never going to achieve her level of success, because she has, like no other writer, made reading a popular past time, making so many people who don’t normally read pick up a book. The last time that happened was when The Lord of the Rings exploded on to the world.

6. A great deal of fantasy seems Eurocentric and lacks diversity beyond having elves, dwarves, and faeries. Do you think that there is any ethnic background/cultural group whose folklore is ripe for being made into a fantasy novel?

I hope I’m leading a vanguard of writers who are going to bring ethnically diverse characters and Muslim fantasy tropes to the mainstream. Muslims have a long tradition of fantasy and folklore, though very little of it is known or popular now, except A Thousand and One Nights and other Arabian Nights styled stories. That said, I love ‘Eurocentric’ fantasy and wouldn’t want to see it disappear or sidelined. I think a blend of the two is much more digestable and desirable and is the approach that I’m going to employ.

I’d like to write every day, but as you say, it is not that simple. I try to write at least once a week, and put in a good few hours on the weekend. The problem is I find it hard to give my full attention to anything else whilst I’ve got the writer’s itch. At times I feel the need to write so badly that I can feel the tension building in my arms and shoulders. But then I do have responsibilities to my employer and to my family, to ensure that they are given their due time. Hopefully, my new tablet computer will help me sneak in some writing whenever I have time to spare.

8. Give me a teaser about The Changeling King. What is a problem that has to be solved within the book?

That’s a tough one. There is so much going on in the book that its hard to tease out any particular arc. One of the mysteries of the book is why is the Mughal Prince, Sultan ibn Sulaiman important to the rest of the plot? His story starts of during the reign of the Mughal Emperor, Akbar the Great, with his own bunch of antagonists and political challenges. Yet somehow, his destiny is linked to Nathan’s and Kryllon. Why is he important?

9. What are you working on next?

I’m currently working on the sequel, The Renegade Prince, which I’m hoping to release around Christmas. I’ve also got a non-fantasy adventure series on the slow-cook at the moment, The Adventures of Some Kid. I’m also working on a couple of short stories, an sf inspired by Mary Shelley’s Frankenstein and a story inspired by Kill Bill. 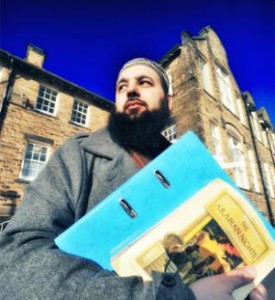 Noor has a website located at:
www.trollking.co.uk
He also has an author page at Smashwords.