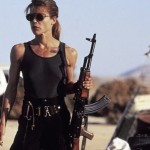 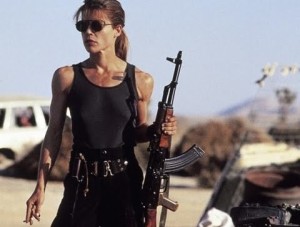 Often in the media, female characters are the satellites to the male characters– there as a love interest or mother and secondary. Even in predominantly chic-intended stories the story arc involves the female protagonist’s growth as being a romantic one where she finds and gets the guy. The hugely successful “Eat, Pray, Love” would be an example. The main character goes through a mid-life crisis where she indulges and fills herself with mountains of Italian food, learns to pray, and then goes to Bali to hook up with the male love interest. Her finding herself means she ends up in a relationship. Science fiction as a genre offers some truly different and diverse female characters whose story arcs do not solely revolve around being the love interest or someone’s mother. Here are a few examples:

While Sarah Connor is the mother to the future savior of humankind John Connor, she breaks the mold and is a character unto herself. She starts out as a damsel in distress waitress being hunted by the Terminator but evolves in the series into its true hero. Without her, John Connor would not have existed, would not have survived, and would not have had the skills necessary to defeat the machines. Sarah figured out what would be needed to save the humans and made sure John knew the things necessary. Sarah Connor’s story arc is one of going from possible victim to proactive agent of change. 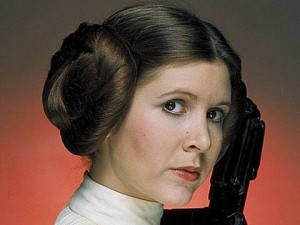 While it is true that most of the guys of my generation have a thing for Princess Leia based on the bikini scene where she is enslaved to Jabba Hut, I would like to point out that in response to Jabba the Hut treating her like a piece of meat she strangled him. Princess Leia does end up involved with Han Solo, but this is not central to who she is and I always thought that unless he went through major character growth she probably dumped him sometime after the celebration on the Ewok planet. Princess Leia is a risk taking part of the rebel alliance. She’s proactive and in the fray. She has ideals and goals and wasn’t afraid to give Darth Vader some what-for. 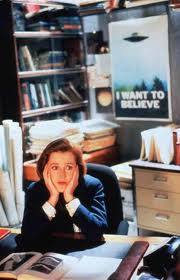 Dana Scully from the X-files is a career woman who was assigned originally to work with Fox Mulder to keep him in check. The two characters always have tension between them but never an out and out romance. They are a dynamic duo and she is there to offer a scientific and rational look at what is being given to them to investigate. The character also presents as open minded enough within the episodes to not immediately seize on the comfortable explanation for the unusual phenomena that the duo investigates. Dana Scully uses her intelligence and creativity to problem solve and push for the truth that Fox Mulder only intuitively knows is out there. 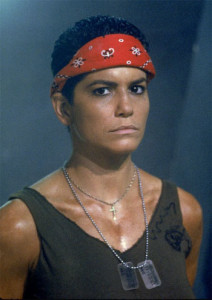 While she is only a secondary character in the second Alien franchise of movies titled “Aliens”, Pvt. Vasquez rocks! She is tough as nails and a true heroine. She thinks and fights and out survives in horrific circumstances most of the marines sent in to battle the aliens on the colony. And she is no one’s love interest or mother. Just a soldier. And she can do more chin ups than the guys.

And no list of strong science fiction female characters would be complete without resilient, resourceful, intelligent, uber-survivor– Ellen Ripley. Ripley survives the alien on her ship as her shipmates are picked off one by one, saves the cat, and then kills the female alien. No tea and biscuits behavior. No batting her eyelashes. Just common sense and using what she had to survive. 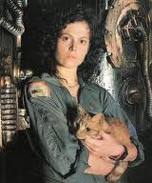