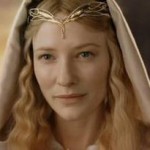 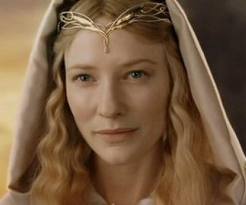 The last couple of weeks I have been thinking about female fantasy characters. I have been trying to remember the ones that impressed me as being strong characters. One character who comes to mind as being particularly strong is Galadriel in The Lord of the Rings. She is Arwen’s grandmother and she has her own history prior to the fellowship of the ring.

In some of Tolkien’s other writings, she is a rebel and banned from Valinor.

During the Second Age, when the Rings of Power were forged, Galadriel did not trust Annatar, the loremaster who taught the craft of the Rings to Celebrimbor and the other Noldor of Eregion. Galadriel was gifted with the power of telepathy and Annatar later turned out to be Sauron pretending to be an emissary from the Vala Aulë. When Sauron attacked Eregion, Galadriel was entrusted with one of the Three Rings of the Elves. Her Ring was Nenya, the Ring of Water or the Ring of Adamant. Conscious of Sauron’s power and wishing to thwart it, she did not use the Ring so long as the One Ring was in his hands.

During the Third Age, when the One Ring was lost, she did put Nenya to use in making Lórien a fair refuge for the Nandor. Galadriel fought Sauron in her thoughts. Sauron wanted to see into her mind, but could not so long as he did not have the One Ring. By this time in the Third Age, Galadriel had become the most powerful of the rulers among the elves in Middle-earth, and the foremost of the remaining Exiles from Valinor.

In The Fellowship of the Ring, Galadriel allowed the Fellowship to stay in Lothlórien after their escape from Moria. When she greeted the Fellowship in her tree dwelling at Caras Galadhon, she tested each to see their character and resolve. She was in turn tested when Frodo Baggins offered to give her the ring. She understood its power and its corrupting influence. She could see that it would make her “great and terrible”, and recalling her own ambitions that had once brought her to Middle-earth, she refused the Ring.

Galadriel is strong not simply because she is the fairest of the elves or because her telepathy allows her to see into the thoughts and motivations of others, she is strong because she recognises power and she knows herself. She is strong because she sees the One Ring and knows what she could do with it and knows that she needs to refuse the ring for the good of everyone. Her refusal is an entirely unselfish act and one done with great wisdom. For these reasons I think she is a magnificently strong female character.