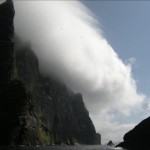 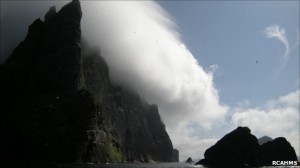 Recently it was announced that there is evidence of a prehistoric settlement in St. Kilda on the remote island of Boreray. A stone building and evidence of terraced agriculture has been found. The island has sheer cliffs that seabirds nest upon and feral sheep wander. Back in the 1930’s the islanders asked the Scottish government to relocate them because their way of life had become untenable. Previously archeologists had presumed that the island was only visited by peoples hunting the seabirds and gathering stray bits of wool, but this recent find changes everything. It is now thought that Iron Age artifacts are likely to be found. Typical Iron Age artifacts are things like needles, spearheads, swords, and sickles.

For any artifact to be found, it has to be tough in order to withstand erosion and decay. Organic matter breaks down over time and the Iron Age was approximately 3000 years ago. The bones of ancient people are sometimes found, but rarely skin, hair, or muscle unless there is some special condition present such as mummification due to extreme freezing, acidic, or dry conditions. Further, the most typical bones to be found are the strongest– teeth, jaw bones, and the femur. Otzi was found frozen in the Alps and his body was so much in tact that MRI’s have determined that he had tooth decay and was murdered by being shot by an arrow. Many mummies have been pulled out of bogs where the acidic water, low temperatures, and a lack of oxygen have preserved the bodies. Here is an image of Tollunde Man who was found in Denmark: 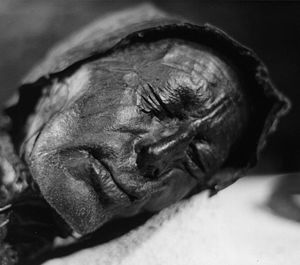 In the 1980’s several caucasian mummies dating from between 3000 to 4000 years ago were found in the Takla Makan desert near Loulan. The Beauty of Loulan had straight long hair and the fabric of her garment was still in tact which is extremely rare. The extreme dry conditions of the desert made this possible:

The fabric has been analyzed and the wool was found to be from a type of Western sheep, the pattern of the weaving was a twill pattern not typically found in Asia, and the colors of the cloth indicate a possible tartan plaid. No one is certain what happened to this settlement of individuals. The mummies appear to have died primarily from smoke inhalation from camp fires rather than violence.

More often what archeologists find are things made of more durable stuff than fabric– stone, metal, bone, and pottery sherds are what are typically found. Stone or dirt mounds that are arranged in too symmetrical of a fashion or are recognizably a dwelling are an obvious first clue that prior inhabitants were in the area. In Newfoundland a temporary Viking settlement was found at L’anse aux Meadows in the 1960’s because regular mounds revealed a Viking style settlement of 8 dwellings. An organized and surveyed dig was set up and such items as a stone oil lamp, a bronze fastening pin, and a bone needle were found. 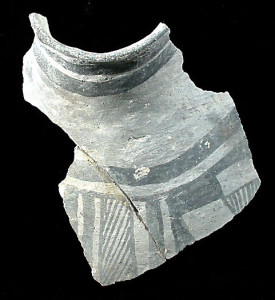 When a dig is set up, the area is cordoned off and broken down into smaller catalogued subsections. Forget Indiana Jones style “archeology”, most archeology takes months or years of back-breaking work. Volunteers and workers at a dig spend hours, days, and weeks gently sifting through the soil to find bone fragments, bits of metal, and pottery sherds. These tiny puzzle pieces are the things that history is reconstructed from. More often whole sections such as the pot fragment pictured above are not what is found, something looking like this is more of the norm: 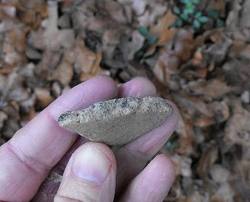 Pottery is made from clay that has been hardened by being subjected to heat. Fired pottery is very durable. It will continue to break down into smaller bits of pottery sherds, but it doesn’t disintegrate into compost. Much of the world’s history comes from the sleuthing of archeologists problem solving and putting things together. Imagine having to daily reconstruct your mother’s favorite vase from the pieces you swept up from the floor after it fell off the shelf. Now go one farther and imagine putting that vase together and all the pieces are scattered all over the house and the house has disintegrated to ruins and you aren’t sure if you are looking at a piece of the vase or not. This is the painstaking task of archeology.

Further, you know that your mother put flowers in her vase, imagine if you didn’t know the purpose of the vase. What else might it be used for? If you found a number of vases and they were highly ornate and seemed to take up a rather important position in the household you may think it had some religious significance. I might think it was a coffee cup. Maybe there are rows and rows of these vases to be assembled from one dig. Maybe they are wine or oil jars? Maybe this culture cremated their dead and put them in jars and you have stumbled upon a type of crypt? Maybe these were broken jars back in their own time period and you have stumbled upon a type of garbage heap?

We have no way to travel in time and know the past completely. We can only get small glimpses of how our ancestors lived from that which remains and through our contemplation and creativity.