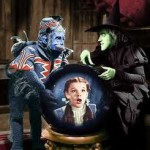 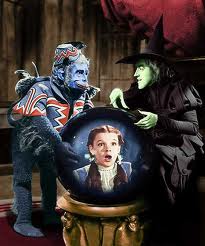 I don’t mean tough as in hard to harm or able to endure– although many are. I mean in the sense of creating a good believable villain. A bad guy who is just bad is one dimensional and not terribly interesting. If there are no ambiguities or reasons for why the bad guy is doing what he is doing it is just random. The villain is left a caricature of bad and can come across as not as effective. His or her villainy is without motivation or passion. It is also hard to care about the hero’s plight and struggle if the villain is one dimensional and appears as not a serious threat.

Consider the Wicked Witch of the West. She kidnaps Dorothy, she sets the scarecrow on fire, and she threatens to drown Toto. And those monkeys of hers are seriously scary. And she lives in a monstrous scary castle with enslaved guards. When I was a kid she and her flying monkeys terrified me. At first glance, the Wicked Witch of the West comes across as some personification of evil. She is willing to go to extreme ends to get the ruby slippers. She appears one dimensional.

Voldemort is another big time bad guy. He kills Harry Potter’s parents and terrorizes the world of the Harry Potter books. He would have killed Harry but Harry was protected by his mother. Obviously a guy who attacks babies is pure evil. He appears at first as the one dimensional He Who Must Not Be Named.

But consider that Voldemort’s humanity is taken away at every turn initially. His name is not to be spoken. He has no body. As the Harry Potter series unfolds Voldemort becomes more human both in the flesh and in terms of what is revealed about him. His campaign to control the wizarding world and the muggle world grows as his humanity grows. He becomes scarier as the reader learns of his childhood and background. He was a child wronged who had great talent, intelligence and power and he grew into an adult who wanted to control the world. Voldemort does what he does not because he is simply evil. He is pursuing his course of action from deep conviction and desire. And hurt.

One person’s villain can also be another person’s hero. Vengeance and hurt are only two possible motivations for a character to be a “villain”. What if the “villain” is a disenfranchised group who has been excluded from resources like food? What if the villain fights the hero of the story to claim a stake out of need? Yes, the hero is being attacked, but perhaps it is out of desperation or necessity. How many times in history did not only the spoils go to the winner but the ability to claim virtue and designate oneself as the culture hero group? The Romans did this. They considered all other groups to be “barbarians’. The Romans were the heroes of their own history.

The best villains have a certain degree of ambiguity about them. If seen in the right light, there is something to sympathize with about them or what they are doing. This makes them more of a threat and more believable.