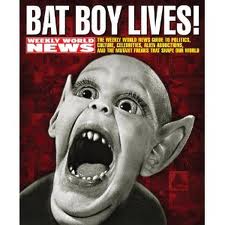 More writing prompts for you for today inspired by none other than… da dada dum…THE WEEKLY WORLD NEWS! In its day, “The News” had some truly inspired creative writing. So spinning off of some their old headlines, writing prompts!

1. Our current political situation is a result of a subtle alien takeover. President Bush was endorsed by aliens. Who are these aliens? Do they just want our fish sticks and custard? What is their plot? 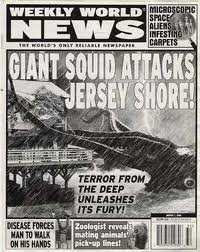 2. Cthulu has arisen! And he is hungry for Jersey! Bon Jovi thought he was safe and Jersey looks like heaven until the Elder God rose up out of the sea. How can the many tentacled one devour Jersey?

4. Alien skulls are found on Mars. Is anything else found? What do they look like? What story can be pieced together from what the exo-archeologists find? Are any of the skulls made of crystal?

5. A vampire cat is caught with a bowl of human blood set out as bait. How does the world react to proof that vampires exist? What do the vampires do?

Go forth and write!