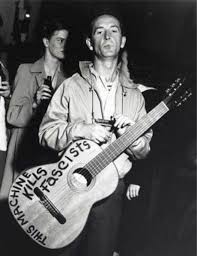 Woody Guthrie wrote “This Machine Kills Fascists” on his guitar. Steve Earl once said of Guthrie, “I don’t think of Woody Guthrie as a political writer. He was a writer who lived in very political times.”

This Land Is Your Land

“This Land is Your Land” was Guthrie’s answer to Irving Berlin’s “God Bless America”. Because he was so tired of hearing “God Bless America” constantly played on the radio, he wrote “This Land is Your Land”. I remember listening to a recording of this song when I was in elementary school. The song spoke of ribbons of highway, sparkling sands, and waving wheat fields. A land that was for you and me.

In this vein of a land for you and me, Guthrie’s songs reflected what he saw around him. He signed the manuscript for “This Land is Your Land” with the comment, “All you can write is what you see, Woody G., N.Y., N.Y., N.Y.” The song originally included the following in the fourth and sixth verses:

As I went walking, I saw a sign there,
And on the sign there, It said “no trespassing”.
But on the other side, it didn’t say nothing!
That side was made for you and me.

In the squares of the city, In the shadow of a steeple;
By the relief office, I’d seen my people.
As they stood there hungry, I stood there asking,
Is this land made for you and me?

These verses were often omitted in subsequent recordings, sometimes by Guthrie.

While in California during the Dust Bowl era, Guthrie was among the Okies who flooded into California. The Californians did not want these immigrants. Employed by a leftwing radio host, Guthrie identified himself as an “outsider”. He spoke and sang of the travails of immigrants with such songs as “I Ain’t Got No Home”, “Goin’ Down the Road Feelin’ Bad”, “Talking Dust Bowl Blues”, “Tom Joad” and “Hard Travelin’”. Guthrie gave the disenfranchised Okies a voice.

When Guthrie moved to New York, he met Lead Belly, Cisco Houston, Burl Ives, Pete Seeger, Will Geer, Sonny Terry, Brownie McGhee, Josh White, Millard Lampell, Bess Hawes, Sis Cunningham, and others. This group became his close friends and musical collaborators, forming The Almanac Singers. They wrote songs for social causes such as union organizing, anti-Fascism, and peace. They fought for the things they believed in with their music. Their songs of political protest and activism spread the message.

During World War II, Guthrie served in the merchant marines. At first he tried to argue he could serve better by staying in the US and singing to inspire people. Friends persuaded him to join the merchant marines where he composed and sang songs to bolster moral. He composed hundreds of anti-Hitler, pro-war, and historic ballads to rally the troops, such as “All You Fascists Bound To Lose”, “Talking Merchant Marine,” and “The Sinking of the Reuben James.”

Guthrie influenced the musicians of the American Folk Revival– people such as Bob Dylan, the Weavers, and Pete Seeger. His son Arlo Guthrie wrote and sang “Alice’s Restaurant” which protested the war in Vietnam.

Songs For Our Time

I am tired of songs about dysfunctional love, random sex and the cache of trivialities most rock and pop songs litter our air waves with. I remember the first time I heard Tracy Chapman’s “Fast Car”. And “Talkin’ Bout a Revolution”. They weren’t spun fluff. They felt solid and spoke from the heart. We are living in political times. I think we need songs that reflect the world around us. And we need a singer like Woody Guthrie who can see the world, sing about it in a real way, and give us our songs of peace and protest.